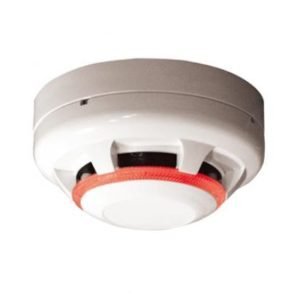 The design of the detector makes it almost completely immune to high air speeds, dirt and radio frequency interference. An alarm is indicated by a red LED on the detector and the alarm status continues until a manual reset is performed in the control unit.

The detectors are equipped with bayonet mounts, which makes them easy to fit and remove. If the detector is contaminated, it will become more sensitive and will gradually go into an alarm mode. In order to avoid nuisance alarms, the detector module should be cleaned once a year.

The smoke detector provides a rapid and reliable warning. The optical detector also indicates smoke from fires that generate large particles during a slow process and at low temperatures (e.g. fires in plastics and wood).